After playing for Redbridge, Ada was signed by Barnet in March 2005, where he made two substitute appearances.

However he was released after just two months and after a short spell at Stevenage Borough was snapped up St Albans City.

Played a significant part in St Albans promotion to the Conference in the 2005-06 season before heading off for full-time football with Exeter City in July 2006.

Featuring mainly in the City reserve team, Ada did make his Conference debut as a substitute for the Grecians against Grays Athletic in a 2-2 draw in Essex, 3rd October 2006.

Ada went on to make a further five full outings for City in the Conference, but then he rejoined St Albans City on loan in January 2007.

Signed for Histon in May 2007 and was virtually an ever present in their first full season in the Conference.

Moved to Crewe Alexandra in May 2009 and stayed at Gresty Road until May 2011 when he was given a free transfer. The following month he signed a two-year deal with Kilmarnock.

Released by Kilmarnock in February 2012, Ada then spent a while training with Burton Albion. Signing for them in 2012 he played 3 games and moved onto Ebbsfleet the same year eventually making 19 apperances for them.

Ada was arrested in March 2012, in the connection to an allegation of rape.

In December 2012 Ada was sentenced to five years in prison after being convicted of rape in Southwark, London on 1 March 2012. 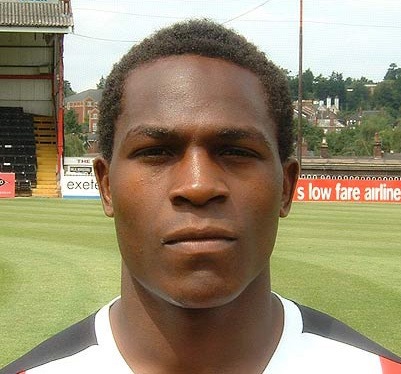