Alcide began his career in local football before joining Emley In the summer of 1992, but after one season he followed his manager Gerry Quinn across the Pennines to Altrincham.

He then returned to Emley before signing for Lincoln City manager John Beck in a £15,000 transfer deal, who gave him his Football League debut. It proved to be a good signing as the Imps won promotion in 1997-98.

Six months later his value had risen to £80,000 as the player was sold on to York City as part of a wage cutting exercise at Boothferry Park.

In 2001 he joined Cambridge United for £30,000, thus reuniting with Beck who had by that time become manager at the Abbey Stadium club.

Following a short stay with non-leaguers, Gainsborough Trinity (having signed for them in August 2002), Exeter City signed the player on non-contract forms as the Grecians were battling to get away from the bottom of the Football League.

However, he only played one game - a 2-1 home defeat against Hartlepool United in November 2002 - and was immediately released.

In the summer of 2004, Alcide reappeared in the colours of TNS (Llansantffraid) for whom he appeared in the U.E.F.A. Cup, but after a short time with them he was on the move again linking up with his former Emley and Altrincham manager, Gerry Quinn, at Ashton United.

His time at Ashton was dogged by illness and injury, prompting his retirement in October 2004. Colin had a hip relacement operation in November 2018. 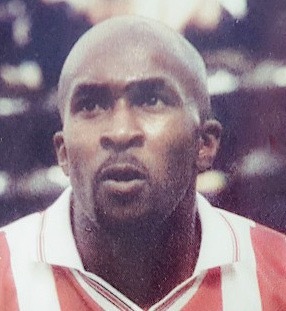 Alcide had a hip relacement operation in November 2018.