Exeter City manager Terry Cooper made Chris Banks one of his first signings after being appointed manager in May 1988.

Banks had commenced his professional career with Port Vale, having worked his way through the junior set up at the club to earn a full contract in December 1982. Although he had six years as a pro at Vale Park, he only made 65 league appearances, scoring one goal, prior to his move to St James’ Park, where he only missed one league match in the one and only season he had with Exeter.

He made his Grecians debut on the opening day of the 1988-89 season, a 2-0 defeat against Wrexham at the Park. His only goal for City came in the 3-1 home win over Peterborough United the following April. Cooper had been a willing accomplice in an April Fool's Day prank after Banks kept a clean sheet as an emergency custodian during the final minutes against Peterborough. "We agreed to tell the press I was Gordon Banks' nephew. The local paper had the headline 'Gordon is my Uncle' and the report had this bit about 'goalkeeping is in his blood'!

Banks then signed for Bath City in the 1989 close season as a part timer and became a labourer in the day job. He remained with them until moving to Cheltenham Town in August 1994, where he once again played in the Football League as he helped them win promotion in 1998-99, some ten years after he had last appeared at that level with Exeter. He eventually totalled 120 league outings for Cheltenham, before leaving the club in 2002 to sign for his home town club, Stone Dynamoes.

He was forced to retire through injury in November 2004, and later trained to be a physiotherapist. He worked as a postman for four years while completing his training,before he was appointed as Youth Academy Physiotherapist at Stoke City in 2007. He graduated from the University of Salford in 2007 with a degree in Physiotherapy. 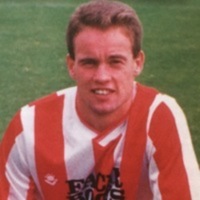 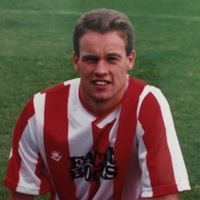