The son of Derek, who played in goal for Bedford Town, Gillingham, Southend United, Charlton Athletic, Swansea City and Torquay United, Ross kept the family tradition going by being signed as an apprentice keeper for Exeter City. He played 4 matches in the South West Counties Youth league and Cup in 1995/96.

Ross became the Grecians youngest ever goalkeeper to make a Football League debut when he was introduced as substitute in the match against Scarborough, in November 1994, replacing Andy Woodman in goal who had been red carded. He was aged 16 years, 6 months and eleven days old. A week later, amazingly, Woodman was sent off again, this time in a 2-1 home defeat against Colchester United in the second round of the FA Cup, and once more Ross was introduced as his replacement to also become the club’s youngest ever FA Cup goalkeeper. He kept his place in the side for the following game, a trip to Bury, where he kept a clean sheet in a goalless draw.

Unfortunately he was to sustain a broken leg in training at the club’s Cat and Fiddle headquarters and that effectively ended his senior career with the Grecians.

He began working alongside his father in the family print business after leaving Exeter and is now the Managing Director of Kingfisher Print & Design who are based in Totnes and have printed the Exeter City match programme for a number of years, as well, as the Aidan Hamilton book, “Have you ever played Brazil”

Ross was appointed first team manager of Newton Abbot Spurs on the 12th of March 2021. 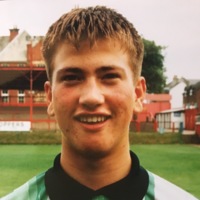 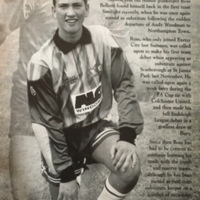