Bergqvist played youth football with Reading and Queens Park Rangers, before joining Aldershot Town in 2009. Bergqvist eventually became youth team captain at Aldershot, and spent loan spells at both Thatcham Town and Dorchester Town, before making his senior debut for Aldershot in May 2011. He joined Farnborough on loan in August 2011, and Basingstoke Town in October 2012.

Bergqvist signed for Exeter City in June 2013, before moving on loan to Welling United a few days later, for the whole of the 2013–14 season.

In February 2014, Bergqvist left England to return to Sweden, signing a two-year contract with Östersunds FK on a free transfer. 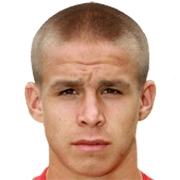