A former amateur on the books of Manchester United, Butterworth followed manager Bill Thompson from Guildford City to Exeter City in May 1957.

At that stage he was still an amateur and on National Service with the Army at Aldershot, but the Grecians manager had high hopes of him for the future.

His debut came in a 2-2 home draw against Southampton in September 1957 and three months later Butterworth signed professional forms for the Grecians following his demob from the Army.

He lasted at St James’ Park longer than manager Thompson; however, he featured mainly in the City reserve team before being released on a free transfer in the summer of 1960, when he signed for Hyde United. 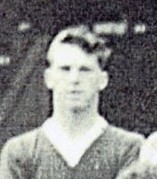