Despite being born in Exeter, Mark Came began his playing career with Cheshire side, Winsford United. He then signed for Bolton Wanderers in April 1984 and was a member of their team that won promotion from Division Four in 1987-88. Unfortunately a broken leg kept him out of action during the 1988-89 season, but he did go on to make a total of 195 league appearances for Bolton, scoring seven goals.

In December 1992 he signed for Chester City, helping them win promotion the following season. At Chester he once played an entire game for them as a goalkeeper, without being beaten, when the team’s regular number one was injured in the pre-match warm up at Scarborough.

After 47 league outings and one goal for Chester, Mark signed for his home town team of Exeter City in July 1994. He quickly settled into the Grecians team after making his debut at Lincoln City on the opening day of the season. Winning the Player of the Year award at Exeter, he spent two seasons at St James’ Park, before making a surprise return to Winsford United in the summer of 1996. He played for them through until December 1998 when an injury forced his retirement; however, he remained at the club and eventually became their manager in the 1999-2000 season.

After retiring from full-time football, Mark had a window cleaning business for 12-years, and in November 2012 was running the Conservative Club in Winsford. 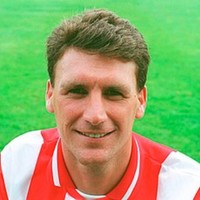 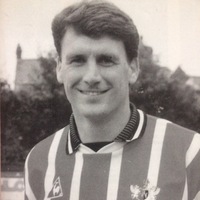