We have already made some general remarks about this game in last Satur day's programme but printing schedules made it difficult for us to squeeze in our usual report for "Just for the Record". The omission must now be repaired as these programmes would certainly not provide a complete record without one of the most important games this club has ever played.
City surprised a lot of people with the standard of their football in this game at White Hart Lane and it was gratifying to hear the volume of applause which many of the City's fine football moves were accorded by an appreciative crowd of nearly 26,000.
Those City supporters who were among the crowd will always recall with pride that it was not until three minutes before the interval that Spurs £600,000 of soccer talent was able to get ahead of the City. Johnny Mitten netted with a cracking drive in the 14th minute, but within four minutes the inimitable Jimmy Greaves, in his best form, equalised after a great run through the middle. The goal was certainly well taken but many of us remain convinced that Jimmy was offside. Alan Banks restored City's lead in the 29th minute following up to head home after Pat Jennings had failed to hold a drive from Dave Pleat, but within three minutes the Spurs had drawn level once again when a shot by Terry Venables was unfortunately deflected out of reach of the diving Pat Shearing.

Bad luck
So we could argue that there was an element of bad luck in conceding both of those Spurs goals, but we have no cause for complaint as there is no doubt that the Spurs attackers were in brilliant. form and it was really too much to ex pect that we should be able to hold the cream of British football on such an occasion.
The goal that really put paid to our hopes was the one scored by Jimmy Greaves just before the interval. After such a ding-dong first half it was a critical time to take the lead, and the fact that Spurs went in at the interval one goal up meant a great deal to them and much more to us. The all-important Spurs goal amply illustrated their ability at backing-up when on the attack and it must have been most frustrating for our defenders to be pushing out shots only to find them hitting them in again on the rebound.

In that exciting first half we had put in eight shots and scored twice, while Spurs had got three goals in eleven shots, so you can see that there was really not. a lot to choose between the sides on the run of the play. However, it was in the second half that the mighty Spurs really asserted themselves and my reckoning made it five shots to Exeter and 14 shots to the Spurs. Once again it was Alan Banks who headed a goal for the City and once again it was from an opportunity created by Dave Pleat. This was the goal that made the score 5-3 for earlier in this half Spurs new centre-forward, Jim Pearce, had got two fine goals. It was wonderful to see the manner in which City kept fighting to avoid inevitable defeat, and two of our best efforts came in the last five minutes when Pat Jennings tipped over a great drive from Dave Pleat, while another effort by Dermot Curtis (who had substituted for Johnny Corr in the 81st minute) was cleared off the line. But in the last minute Jimmy Greaves, backing up brilliantly once again was on hand, to hit the ball home after a header by that footballing genius, Cliff Jones had been blocked.

IT TOOK the genius of Jimmy Greaves to knock Exeter City out of the League Cup at White Hart-lane last night. He scored a fine hat-trick after the little Fourth Division side had twice shaken Spurs by taking the lead and stealing the first-half glory. Exeter first showed their menace when John Mitten. ran well into the penalty area and pulled back a fine shot that Alan Mullery just blocked.

Then, in the fifteenth minute. Johnny Newman hit a free-kick that rebounded of the Spurs "wall" and Mitten ran in to drive a tremendous shot past goalkeeper Pat Jennings from eighteen yards But Exeter's lead lasted only five minutes Mullery put Greaves through the middle, and although be looked offside, referre Rex Spittle (Norfolk) allowed him to go on for an easy equaliser. Exeter came swarming back to take the lead again on the half hour
Goalkeeper Jennings. could only knock up a hard drive from David Pleat and Alan Banks dived headlong to force the ball into the net, Exeter's lead, lasted just two minutes this time. Terry Venables moved down the middle and hammered in a twenty yard shot off the far post. Spurs were now taking command. Cliff Jones hit goalkeeper Peter Shearing's legs had another fierce drive blocked on the line, then tested the goalkeeper again with a spectacular overhead kick. In the forty-third minute  Spurs went ahead for the 1st time. Venables took a great free-kick just outside the box and Shearing could only get a hand to Alan Gitzean's header Greaves lurking by the near post nudged the ball in. In the second half two great headers by Jones brought equally fine saves from goalkeeper Shearing. Spurs, gradually tightening their grin on the game, made it 4-2 in the 62nd minute. Jimmy Pearce. unmarked only eignt yards on headed in a clever chip from Greaves

Fine Shot
Pearce a stand-in for €125 000 Martin Chivers scored again 8 minutes later driving a fine shot past Shearing from 25 yards. Exeter were being pushed further and further buck now and their pride kept them running. Yet they got a third goal when, from Pleats cross  Banks headed past Jennings. Pleat had a fine shot well saved by Jennings and Cyril Knowles kicked a shot off the line.
In the last minute Greaves completed his hat-trick and brought Spurs tally to six.
By Nigel Clarke 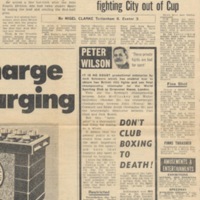 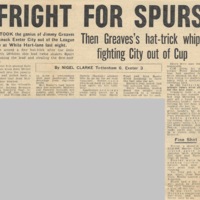