Notts County continued their recent revival, this time at City's expense, and their new £10,000 signing, Richie Barker from Derby County, played a major role in their victory.

City were lively enough throughout and it was not until the last minute that County got the third goal which made both points safe for them. Johnny Corr scored City's goal. Les Bradd (2) and Don Masson netted for theCounty.


Brian Sharples made his debut for City in this game. 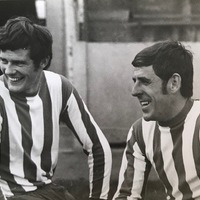