For 72 minutes of the Exeter City-Gateshead game on Saturday I thought that it was going to be the same old St. James's Park story that was being churned out week after week not so long ago. It looked as if City were going to go through the game having played all the football and done. nearly all the attacking-and then come out with just one point, or maybe none at all, because of their feeble finishing. And this is just what would have happened but for young Trevor Atkins, This right-wing reserve stand-in for Nelson Stiffe had already brought City level in the first half, and in the 72nd minute. he finished off a good all-round performance by banging in the winner. Yet his two efforts could have just been drops in a goal-scoring ocean. if the rest of City's forward line had had any finish. For Gateshead, who have not wont away from home yet this season. were hardly ever in the game, apart from a short speld in each half. They could only wocty City with an occasional breakaway-and they only took a 15th-minute lead because of an appalling defensive mistake. Gateshead goalkeeper. Brian Williamson, had a good game-good enough for the City fans to cheer him off the field. But though he made some great saves, and stopped certain-scoring shots from Mitchell and Rees, every City forward had a chance to beat him. Just three examples-Graham Rees, right through in the first half, shot five yards wide: Jack Wilkinson, running through with an even better chance, did the same: Andy Micklewright, five yards out. somehow blasts a low Wilkinson cross well over the bar. City won, and they won with some very good football that left Gateshead gasping-but if they start missing chances like this they might not be able to get out of the habit in games when they are really up against it, and every chance is vital. City's defence was generally well on top, and Ken Oliver had a great game. But he was one of the culprits in that, unnecessary 15th minute Gateshead goal,

Stood and watched
Right-winger Peter Stephenson took the ball down to the edge of the City penalty area, and while four defenders stood and watched him, he held it for almost a minute and put his cross past Alan Jones. And City were caught on the wrong foot twice near the end of the game. First, centre-forward Trewick got through while City appealed for offside, but Jones ran out and deflected his shot for Oliver to clear: then Steele ran in on to a Stephenson cross-but hit it over the bar.Though If anyone calls City lucky. for getting out of these two sticky spots, I defy them to find an adjective for Gateshead after their Innumerable escapes. Time after time City would be stopped by a last-minute tackle, or a leg would fly out in desperation and just deflect a shot or a through pass. For City were generally faster and fitter: and for footballing ability there was really only one side in it for most of the game.
Atkins's goals!


The first, in the 40th minute was nodded down to him by Jack Wilkinson from a Dale corner. and though right-back Dawson tried to block his shot. he only deflected it past Williamson ati a different angle. The winner was a similar sort of shot, after a corner taken by Foley had been pushed out to him, And these two goals also added up to an unhappy afternoon for former City wing-half George Lackenby for Lackenby, now usually a wing half with Gateshead, had been moved back to left-back for this match.

EXETER 2, GATESHEAD 1
SELDOM have Exeter had so much of the play and squandered so many chances. They seemed to be suffering from anxiety complex before a great shot by Atkins gave them victory in the 73rd minute. Two of the worst offenders were centre-forward Wilkinson inside-left Mickiewright and
Outside-left Dale was only slightly less guilty. The only forwards who did not share the blame were inside-right Rees and 18-year-old outside-right Atkins.
Exeter were a goal down in the 15th minute. Armstrong was un challenged and headed the ball inta the net well out of Jones? reach. It was 25 minutes before Exeter got an equaliser.
Williamson Cheered
A shot from the edge of the box was diverted into the net by right back Dawson, standing almost on the line. After that Exeter did 90 per cent of the attacking frequently swarming around the goalmouth. But their shooting was deplorable until Atkins' shot gave them the points. Though twice-beaten, Williamson proved himself a great goalkeeper. He was cheered from the ground. None of his colleagues deserved such a tribute. Gateshead's attack never clicked, Spasmodie raids seldom looked dangerous and the only three worth-while shots caused Jones no trouble. Even so. Steele might have saved, point in the last minutes when he fired over at point-blank range. 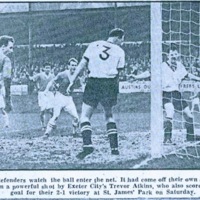 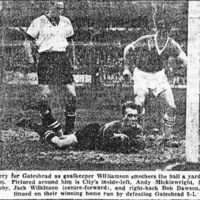