We open the 1986/87 season with a notice of regret for the passing away of footballs most respected elder statesman, Sir Stanely Rous, C.B.E. who died at the age of 91 years on the 18th July. Sir Stanley, who in his time had been a top referee, Secretary of the Football Association and President of F.I.F.A. had a close link with Exeter having completed his education at St. Luke's College, where he had appeared in goal in the College Football Team. He will be sadly missed by the many who knew him and as a mark of respect we aks you to join us in a minutes silence in memory of Sir Stanley immediately prior to the kick-off of todays game.

New Programme
Older supporters amongst you today will note a degree of familiarity about the front of the programme which we are using this season. It is a reproduction of the front cover showing the north view of Exeter Cathedral which was used in the mid 1950's.

Friday Night Football
The Club did experiment last season with two or three Friday night home games which did not prove to be successful. Therefore this season all our home weekend Football League fixtures will be played on Saturdays, kicking-off at 3 p.m. whilst our Football League home mid-week games will be played on Wednesdays, kick off 7.30 p.m. There are however, two exceptions to this, those being when Torquay United visit us on Boxing Day, when the kick-off is at 11 a.m. and on Monday 4th May (May Day) when Wolverhampton Wanderers are the visitors and the kick-off is at 3 p.m. Home games in the Macbar South West Counties League, the majority of which were played at the Cat & Fiddle Training Ground last season, will this season be played at St. James' Park on Monday evenings kicking off at 7.30 p.m.

Ground Works
During the close-season, St. James' Park has been closer to resembling a building site rather than a football ground-largely due to the work being carried out by the contractors in the Cowshed to comply with the Ground Safety Certificate, but nevertheless the opportunity has been taken to smarten up the ground with a coat of paint and the Club would like to thank all those volunteers who have assisted with this work-a large proportion of the workforce comprising of members of the Centre Spot Social Club and the Junior Grecians Committee.

Supporters Association
At the end of last season Supporters Association Committee Members, Maurice and Berry Dimond relinquished their positions of running the ground catering-thanks to both of you for your efforts-and this role has now been filled by former Exeter City full-back Cec Smyth and his wife Angela.

Clifford Hill
Mr. Clifford Hill the Club President tells us from his home overlooking the sea at Beer that he is recovering well from his illness that struck him some three months ago. Whilst not quite ready to return to St. James' Park yet Mr. Hill spends most of his time tending his roses and thinking of the Club. He looks forward to the time in the not too distant future when he will be attending matches here again and meeting old friends. Mr. Hill has been overwhelmed by the good wishes of many of the supporters and in turn wishes everyone at the Club, Directors, Players, Staff and Supporters a very successful season.

Have we really had a twelve week break? The close season seemsto have passed so quickly with the World Cup, holidays, alterations and improvements around the ground, the comings and goings of players and of course pre-season training which started on July 15th and already the day we have been looking forward to, and planning for, the 23rd August has arrived!

What does this season hold in store for us. I am optimistic-positive as we say in the game-but what are the signs and circumstances that turn optimism into reality? Though no one has a devine right to be successful, success and promotion are earned and not handed out on a plate, belief in ourselves and hard work so far indicate a good season ahead for us. We have added new faces to the squad and lost players through the freedom of contract system, but despite losing these players services I feel we have the right blend to offer some good and exciting football judging by what I have seen in the pre-season period.

Despite the hope that competition on the field will be hard but honest can I just say that I hope that is where the physical competition stays. We have a good record of crowd behaviour on the terraces at St. James' Park and that is the way we want it to continue. The game in general is under a microscope as regards its behaviour, lets not be responsible for bringing any more shame on the sport but work hard to bring back its self-respect and always create a welcoming atmosphere at St. James' Park.

An atmosphere of this nature plus the encouraging development of the youth with Mike Radford, the increasing popularity of the Centre Spot Social Club under the new management of Tony Kellow and the positive attitude of the 'behind the scenes" staff should, if the reward for hard work is success, see St. James' Park as the place to be on match days and so we welcome you back today with the knowledge on our part that success has to be worked at it doesn't just happen. We will be doing our best not to let you downl Thank you for your support
COLIN APPLETON

Exeter City begin another season in the Fourth Division with a professional staff of 15 players, and a third of this number were signed during the close season.
From what we have seen so far, we are very pleased with the five new faces. They have fitted into the team extremely well and we as a club, are much more hopeful this year. The side got away to a good start a week ago with a 1-1 draw at Peterborough and one of the happiest men on the field was John Kirkham, who joined us from the East Anglian club just over two months ago. He was made captain for the day and did a good job for us with an effec tive display in mid-field. Tonight we would like to introduce you to the club's five signings and hope you, the supporters, will give them a good wel come to the Westcountry.

PETER SHEARING (goal-keeper): Born in Uxbridge, he was signed from Plymouth Argyle in July. This is his second spell with Exeter, having been transferred from St. James's Park a few seasons ago to Home Park. He has had previous experience with Portsmouth and West Ham.

JOHN KIRKHAM (wing-half): Born in Wednesbury, John came to us from Peterborough after being highly recommended. Over six foot tall, he is one of the biggest mid-field players we have had here for some time. He loves to come forward and has won Under-23 caps for England. A former youth international, he had seven seasons with Wolverhampton Wand erers.

JOHN MITTEN (inside-forward): Born in Manchester, John is the son of the famous Charlie Mitten, and is known to his colleagues as "Charlie." Although wearing the number ten shirt, he is a mid-field player and moved from Plymouth in July. His previous clubs include Newcastle, Leicester, and Coventry.

PETER BULLOCK (centre-for ward): Born Stoke-on-Trent, Peter came down to Exeter from Colchester in July. He is a hard working player and good in the air, and has experi enc behind him, having played for Birmingham, Stoke, and Southend. His younger brother is at present with Oxford United.

DAVID PLEAT (winger): Born Nottingham, David is an ex youth international and can play on either wing. He was another July signing from Shrewsbury. He has a hard shot and has been with Nottingham Forest and Luton Town. Exeter City would like to welcome these, and the retained staff, and hope that the side can continue to re-pro duce the form we have seen from them against Stoke City and Bristol Rovers in pre-season, and Peterborough a week ago.

Pre-Season Friendlies
HOW THE PRESS SAW IT

Although so little can be read into pre-season warm ups, Exeter's first friendly before the new campaign opens was pretty disappointing to say the least last night. They were deservedly and decisively beaten by the newly promoted Third Division side Port Vale, and only 349 people no doubt the torrential rain an hour before the game was a deterrent-turned up to see the affair. Port Vale were the livelier and better organised outfit throughout than Exeter and their striker Richard O'Kelly grabbed four goals himself. But it was not quite as gloomy as it seems because Exeter certainly used the game to ring the changes and gave all five close season signings a part in the match. City lacked pattern and purpose although some of the newcomers, particularly Steve Pugh and Andrew Watson showed some neat touches.

Following their midweek drubbing at the hands of Port Vale, Exeter City put on a much improved performance last night as they went down 2-0 to First Division newcomers Charlton Athletic in another friendly at St. James's Park.
Charlton broke through six minutes after half time when Steve Aizlewood's fiercely struck corner fizzed across the 6 yard box, and was headed in by interval substitute Micky Bennett at the far post. Three minutes later a carbon copy move saw Charlton go 2-0 up with Aizlewood's corner being headed on by Peter Shirtliff and nodded home by Mark Stuart.

Exeter City fought back from behind to earn a well deserved draw against First Division Southampton at St. James's Park last night. Exeter put up a battling first half display and kept the Southampton team well under control, matching them tackle for tackle. Dave Armstrong prodded home a corner to give Southampton the lead. City came out in fighting mood from the break, and within minutes had pulled level, with Keith Viney slamming the ball home from close range. 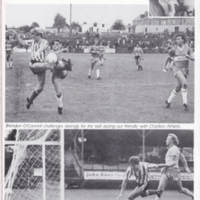 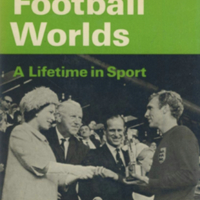