Although Exeter-born, Crabtree started his career as an apprentice with Bristol Rovers.

Prior to that he was the keeper in the Exeter side which made the quarter-finals of the English Schools Shield in 1970-71, playing behind centre-half John Scott, who was later to play rugby union 34 times for England.

He progressed through the ranks at Bristol Rovers to earn a full contract in February 1973, playing seven league matches for them.

Crabtree also had a loan spell with Doncaster Rovers in October 1974, playing just the one league game.

After leaving Bristol Rovers he dropped into non-league football and was playing for Dawlish Town when he signed for Torquay United in August 1975.

He again only played the one league match for the Plainmoor club, before returning to Dawlish Town.

It was from there that Exeter City signed Crabtree on non-contract forms in July 1983 and once more he was to feature only the once, in a Third Division fixture at St James’ Park against Plymouth Argyle in April 1984.

Crabtree later played for both Tiverton Town and Minehead. In 2009 he was working as a Territory Manager for Carlsberg. 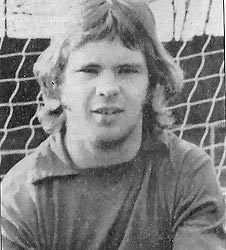 I went to Vincent Thompson Secondary Modern School in Exeter with Richard Crabtree he living in Thormpark Rise and myself in George's Close, Whipton  I joined the RAF in Jan 1971 and my first posting in Jan 1972 was after training was to RAF Colerne near Bath.  Took the opportunity to travel to Bristol Rovers to watch my old schoomate.  However, I think he had a  bad night as I think I am right in saying that  Rovers lost 7-0.  Notwithstanding that it was great to see him in action !!!