His Exeter career saw him make 147 appearances, score 37 goals and find himself a permanent home in the heart of every fan who watched him play. And with so many memorable moments to choose from Pete Evans had the unenviable task of selecting just four for this week's unforgettable.

Number 4: Leed-ing The Way
The rest of my list consists of fantastic finishes and vital goals that helped make Stanno a hero to so many. But just as crucial to the cause of the club he loved so much was his unbelievable engine, his never-say-die attitude and the tireless running always evident whenever he pulled on the City shirt. These attributes were perfectly summed up in our 2-0 wi over Leeds back in January [2010]. As he left the field on 89 minutes to an awesome roar Jimmy Giles, live on Radio Devon, exclaimed: 'Adam Stansfield - fantastic. He has earned his money today that is for sure. His mum will be very proud of him.' Well said Jimmy.

Numer 3: Jamie Who?
As the Setanta cameras rolled into town for a Sunday evening kick-off in January 2008 all the focus was on K+Jamie Mackie. 12 goals before the turn of the New Year made him hot property but as Mackie waited to depart it was his replacement who took centre stage with a memorable double to defeat Oxford. After just 29 minutes Stanno opened the scoring with a shot smashed low and hard into the corner before a glorious send just seven minutes later after Steve Basham sent him clear. Showing his usual electric turn of pace Stanno flew into the box, shimmied past the keeper with unnerving composure before rolling the ball into an empty net. Jamie Who?!

Number 2: Double Trouble For Southport
It seemed like City would blow it once again on the final day. A 0-0 draw at Stevenage the week before meant it all came down to a home game with Southport at The Park but as the match approached the 70 minute mark City were 1-0 down and easing for an abrupt end to their 2006/07 campaign. Until Stanno's intervention. Knocking a bouncing ball into his path Adam hit a stunning left-foot half volley across the keeper and into the far corner on 68 minutes before two minutes later he struck again with a poacher's goal from close range after Andy Taylor's drive was too hot to handle.

Number 1: Chaos At The Kassam
Just nine days later Oxford's packed Kassam Stadium saw my favourite Stanno moment. A goal of real class and real importance from the substitute to turn the Semi Final Second Leg on its head as Exeter's voyage to Wembley looked set to hit the rocks. We were approaching the 70th minute when Rob Edwards, as composed as ever, pinged a beautiful cross-field pass from the centre circle towards Stanno on the right flank. Whilst the ball was travelling he began moving towards the box where he controlled it with his body, allowing him to cut inside Burgess. He then dropped his shoulder to go around outside Gilchrist and make room to squeeze a superb right-footed shot low into the far corer from an angle. Utter delirium followed. City had come back yet again. It was a wonderful goal not just in its execution but also its immense importance. 50minutes and a heart-stopping shoot-out later and Exeter were heading to Wembley for the first time in their history. 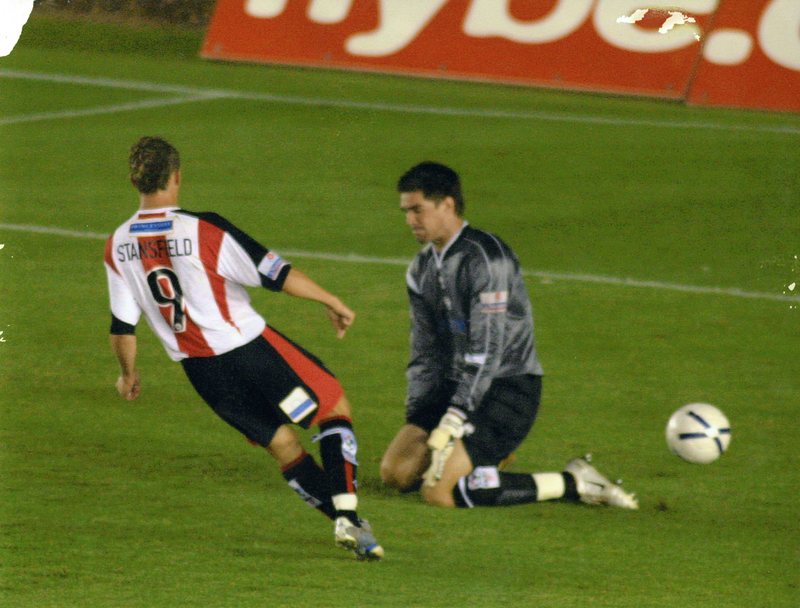