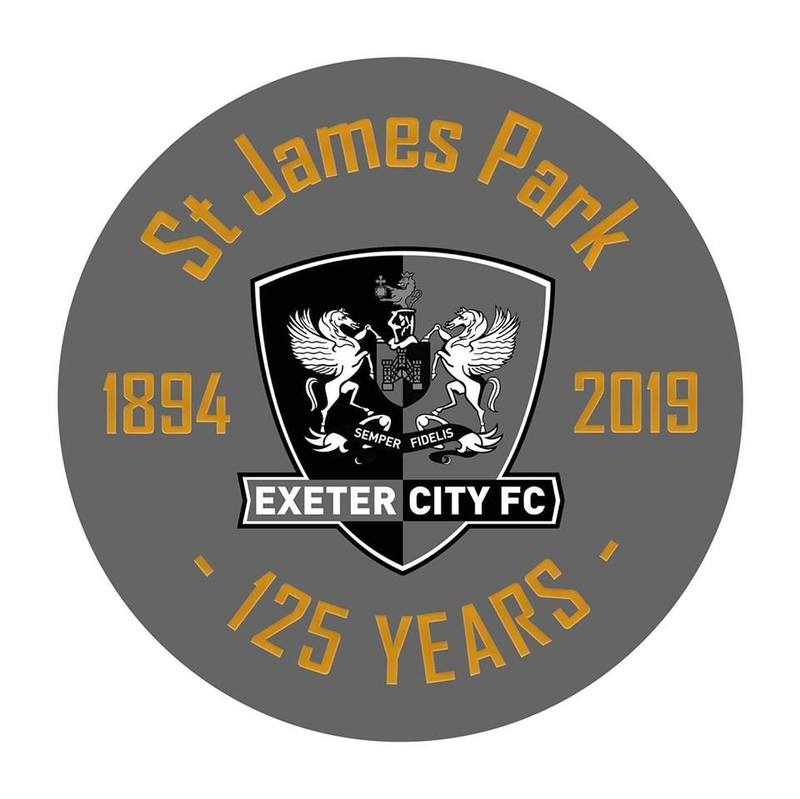 6 October 2019 marked the 125thanniversary of the first known association football match at what was then known as St James’s Field.

'Soccer' had not become popular in Exeter untill the 1890s, and so the field, up to this time, had been used for a variety of activities, including farming, shows and other local sports events. However, in 1893, a team was assembled, featuring local men and recruits from the local barracks, to represent the City of Exeter in the association code.

To mark the anniversary, this exhibit contains a photo of the first 'City of Exeter Team', a commemorative poster, a short film of newspaper highlights, and first hand copies (with transcripts) of the newspapers that covered the historic event.

Sincere thanks to ECFC Historian, Aidan Hamilton, and Minehead AFC Historian, Brian Walder for their assistance in this exhibit. 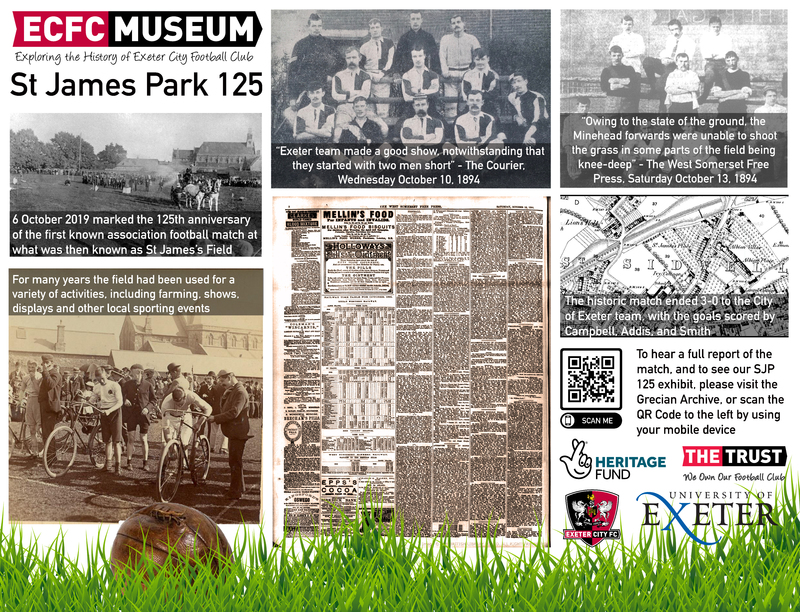 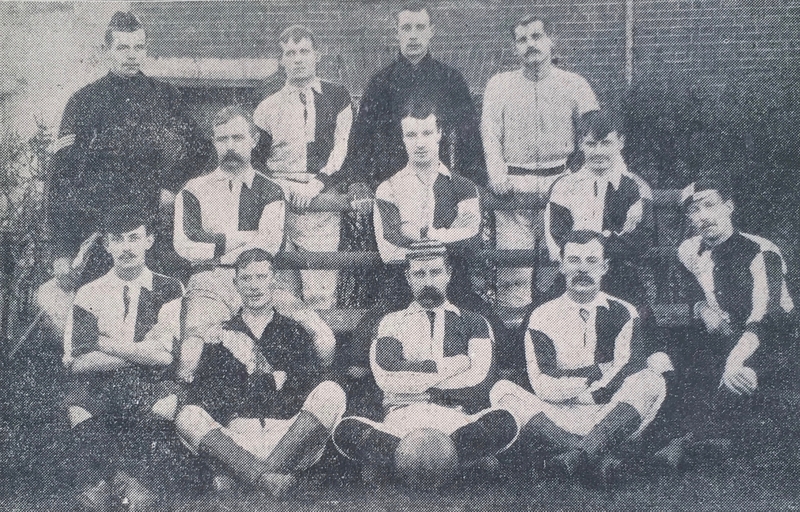 Back Row: A. E. Denning (Hon Secretary), Littlehales (back), Bayles (goalkeeper), and Carey (back). 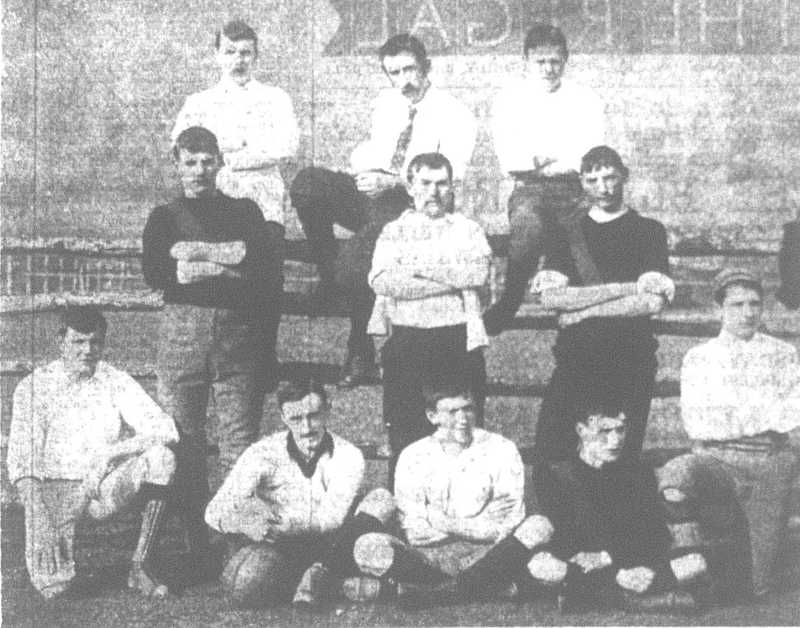 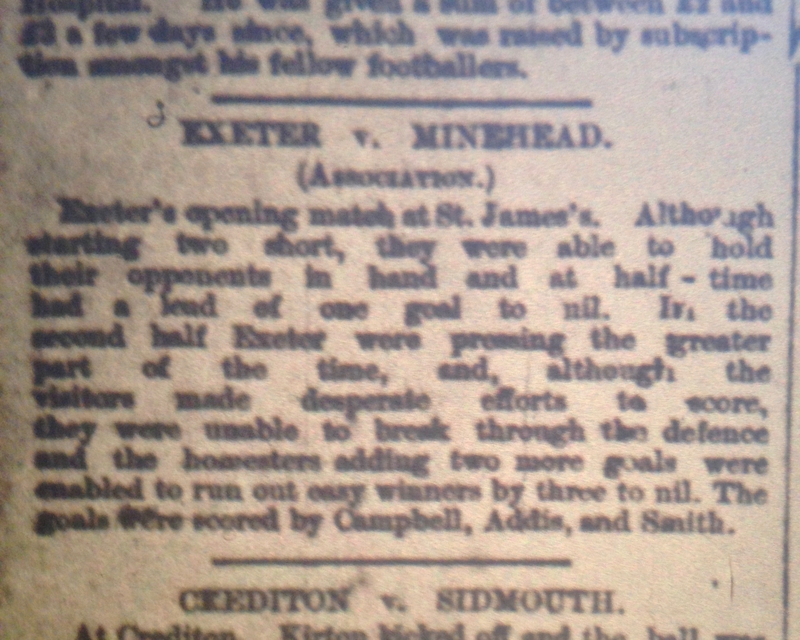 "Exeter's opening match at St James's. Although starting two short, they were able to hold their opponents in hand, and at half-time had a lead of one goal to nil. In the second half Exeter were promising the greater part of the time, and, although the visitors made desperate efforts to score, they were unable to break through the defence and the homesters adding two more goals were enabled to run out easy winners by three goals to nil. The goals were scored by Campbell, Addis, and Smith." 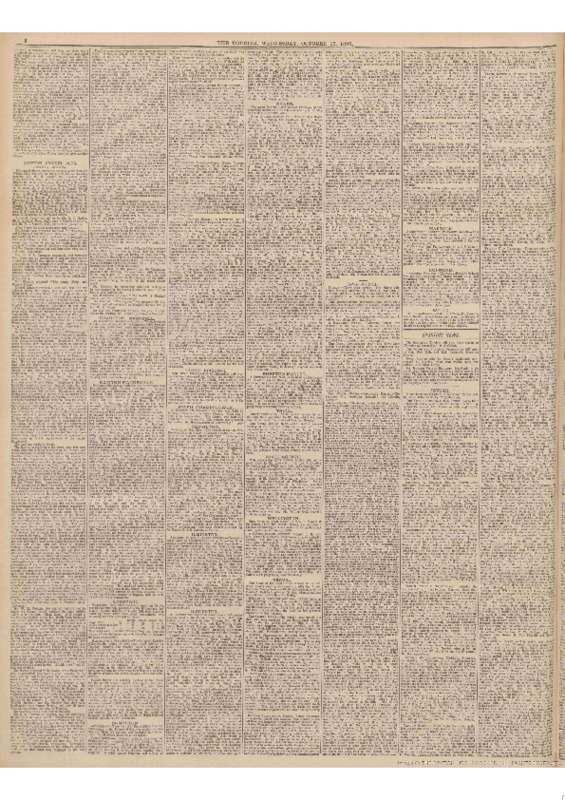 "A match under Association rules between Exeter and Minhead, played at St James's Field, Exeter, on Saturday, ended in a win for the home team by three goals for nothing. Exeter team made a good show, notwithstanding that they started with two men short. Minehead opened proceedings, and Exeter soon after had a free kick, but nothing came of it. The visitors several times got very near scoring, but after the homesters had their full complement on the field they had to act mostly on the defensive." 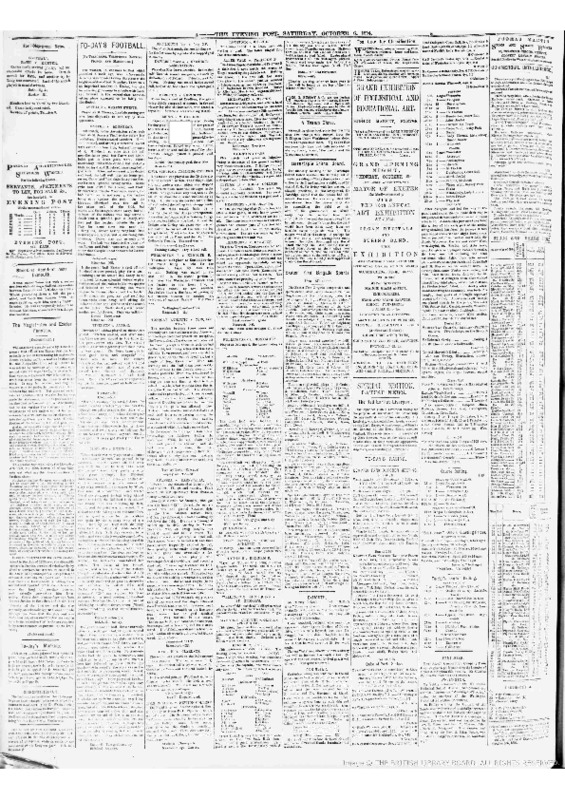 "This match, under Association rules, took place at St James's Field to-day before few spectators. Exeter started twoshort. Minehead started, and shortly afterwards Exeter were awarded a free kick, but nothing came of it. Minehead at once took the ball near the home goal, but Carey and Littlehales put in some good work. Smith came away with a nice dribble but kicked a little too hard and Minehead were awarded a goal kick. Minehead were not to be denied and took the ball well into the home preserves. Carey and Littlehale being conspicuous for some splendid saving tactics. Burnn (who now arrived for Exeter) and Smith dribbled well into the Minehead quarters, and had hard lines not scoring, the leather being sent against the post. On the kick-out, Minehead took the ball to the other end of the field, but Burnn and Smith came away, but the defence of the visitors was impenetrable. Smith sent a splendid pass to Davey, who just put the leather outside the post. Play for some time was near the visiting line, Exeter having very hard lines not scoring, Smith and Burnn being conspicuous. Davey also put some good work. The ball was taken to the other end but Burnn and Smith came away, the result being that Campbell shot through for Exeter.

In the second half Exeter kicked off and Minehead at once pressed, play for a time remianing near the Exeter line, Carey being prominent for some splendid defensive play. Smith received the leather in his own quarter and dribbled to the visiting line, where he gave to Burnn who kicked the leather out it struck the post, no goal resulting. Burnn again came away, and giving the leather to Addis, the latter scored the second goal for Exeter. Smith shortly after scored another goal for Exeter. Time was called - 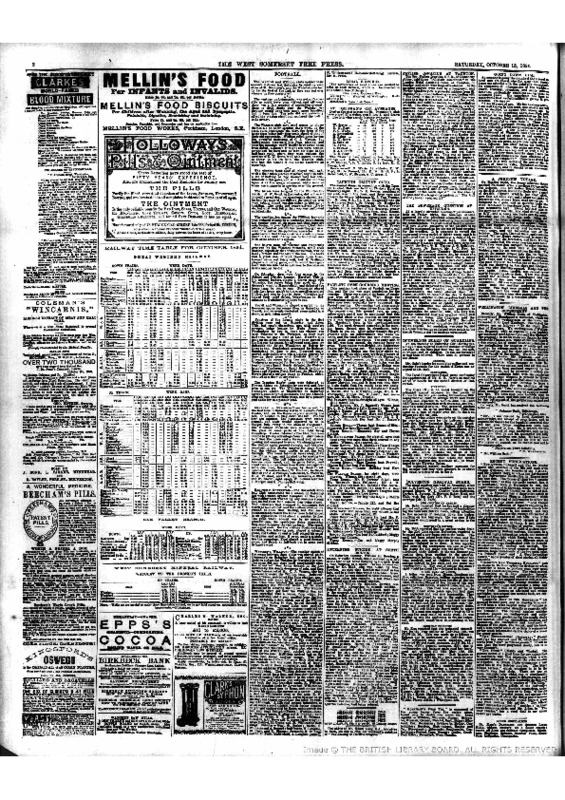 "Minehead v. Exeter - These teams met for the first time on Saturday last in St James's Field, Exeter, and, on the Exeter captain winning the toss, he elected to play down the hill. For the first ten minutes, the homesters were rather penned, and their citadel appeared to be in danger, but, owing to the state of the ground, the Minehead forwards were unable to shoot, the grass in some parts of the field being knee-deep. Exeter obtained a free kick, but were unable to get any advantage from it. Just before half time the home centre forward had an easy opening and managed to score. On changing over, the visitors again pressed strongly, and the play remained in the Exeter quarter for some time, but the visitors were unable to get the ball through. The home forwards broke away, down one of the wings, and finished up by scoring the second goal. The ball being again started, play became more equal, and the game faster, and about two minutes before time Exeter managed to score one more, thus winning by three to nil.