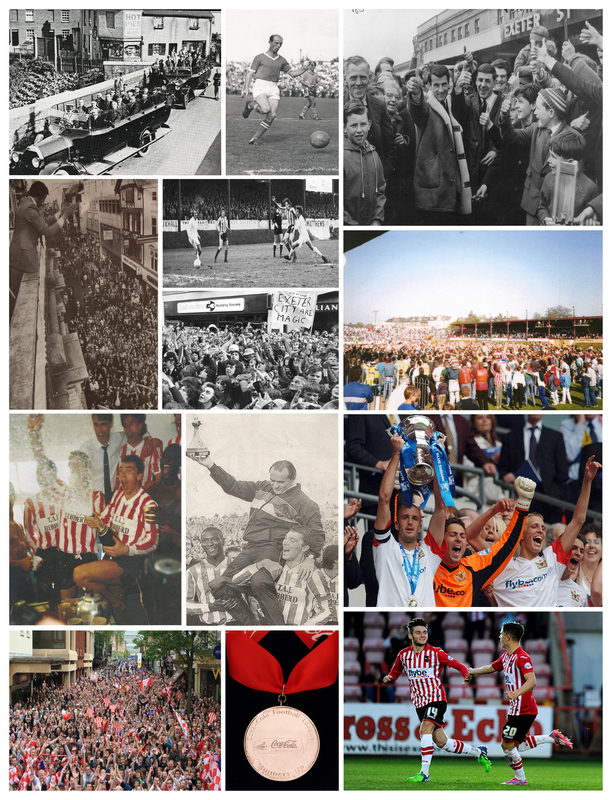 Despite the seemingly continual battle for survival, there have also been plenty of happy memories and moments to celebrate alongside the challenges that go with running a football club.

During season 1930/31, the club embarked on a giant killing cup run which led to the City being included in the hat for the semi-finals and enabled them to make a profit for only the second time in their history without having to sell players. On that cup run they beat First Division Derby County in the third round, Second division Bury in the 4th round, First division Leeds Utd in the 5th and were then drawn away to the then mighty Sunderland. Against all the odds the City drew 1-1 at Roker Park and were met by thousands of supporters on their return to St David’s Station. The following Wednesday the City attracted a record home gate of 20,984 and pushed Sunderland all the way before losing 2-4.

Two seasons later the majority of that successful cup team almost made club history by finishing second in the table at a time when only the top club was promoted. During that season a club record 33 goals, in 32 league appearances, were scored by centre forward Fred Whitlow. This included seven hat-tricks. Late in the season the city also paid club record fees to sign two players from Fulham in an effort to win promotion but to no avail. Despite this being their most successful season so far the club made a loss of £1,6980, largely due to transfer fees.

This kind of form in the league was not to continue, but in the 1933/34 season City won their first trophy by becoming the first winners of a new competition, the Third Division South Cup, beating Torquay in the final played at Plymouths very own Home Park. In an earlier round Fred Whitlow decided that regular hat-tricks were boring, so doubled up by scoring six goals in an 11-6 beating of Crystal Palace.

In the immediate post war years, City struggled to finish more than halfway up the table. However like all other clubs they benefitted from the large attendances at matches with an average home crowd of 9,140 in the first six post war seasons. The 1950s saw mixed fortunes for the club, with the club often finding themselves placed in the lower half of the league table. Then, in 1958, the Football League decided to replace the regional leagues with the new third and fourth divisions.

This again put strains on the club’s finances, as they were faced with lengthy and costly journeys to face clubs such as Workington, Barrow, and Darlington. However, in that first season the side performed well, particularly at St James Park, and was only just pipped to promotion, finishing in a respectable fifth.

Throughout the 1960’s financial problems were always in the background restricting the progress and ambitions of the team. However for supporters they are best remembered for the club’s first ever promotion and some high profile matches that are still remembered as high points for fans today.

In 1960 they were drawn against Manchester United in the inaugural Football League Cup. They nearly pulled off a giant killing shock in the first match at home drawing 1 v 1 but lost the replay 4 v 1. Amazingly the attendance at St James Park was higher than that for the replay at Old Trafford.

In season 1963/64 City achieved their first ever promotion playing in an all red strip. Whilst most fans remember the goals of Alan Banks (18 goals in 28 games) recognition most also be given to a solid defence and the class of Dermot Curtis playing up front with Banks. Dermot Curtis became the first ever Exeter player to win international honours whilst at the club, when he played for the Republic of Ireland against Austria.

After two seasons in the 3rd division the club were relegated back to the 4th and more struggles to survive both on and off the pitch. The end of the decade brought three games against 1st division opposition in the same season, two in the league cup and the other being in the FA Cup. In season 1968/69 after three hard fought games against local rivals Plymouth Argyle, which the City eventually won 1 v 0 after extra time at Plainmoor, City played Sheffield Wednesday. The result being one of those games which thrilled the hearts of the City fans as they played Sheffield Wednesday off the park, winning 3-1.

The appointment of John Newman as manager in 1969 resulted in him producing teams that apart from one season never finished below 10th in the table until Bobby Saxton replaced him in the 1976/77 season. Under Saxton, City lost only 3 games out of the remaining 28 including winning the last 6. This included the game at Barnsley where the City fought back from 3-0 at half time to win 4-3. With such a run of good form the City finished second in the league and won their second promotion. This time, their stay in division 3 lasted seven seasons.

City also had a new goal scoring hero in the guise of Tony Kellow, who became the second City player after Alan Banks to score a century of goals for the club. One memorable event occurred in October 1978 when the City played Bolton Wanderers winning 2-1. Present at that game were Dick Pym and Harold Blackmore who had played for both clubs in the 1920s and 30s.

In season 1980/81 the City progressed to round 4 of the FA Cup where they drawn away to Leicester City. A 1-1 draw brought Leicester back to St James Park where the City triumphed 3-1. If that was not a big enough shock more was to come in the next round. This time the City visited the ‘other’ St James Park and drew 1-1 against Newcastle United. A packed St James Park saw the City overwhelm their most illustrious opponents 4-0 to earn a place in the quarterfinals for the first time in 50 years.

Tottenham Hotspurs, who were captained by a certain Steve Perryman, would eventually end our giant-killing run, and with that the highs of the eighties seemed to fade away, as managers such as Gerry Francis failed to build on what had been a sustained period of relative success for City. With crowd numbers dropping below 2,000, the arrival of Terry Cooper in 1988 came just in time to send the club to one of their greatest highs. In just two seasons Cooper put together on of the club’s best ever teams, and with Shaun Taylor leading the way as captain they went on to win the fourth division title without losing a single match at home in the league or cup.

In the following seasons problems on and off the pitch would mean that highs would perhaps remain at an all time low, at least in terms of promotions and cup campaigns. However despite the off field dramas that would surround the club, players such as Steve Flack and Martin ‘Buster’ Phillips would mean that there were still many memorable afternoons for City fans under the management of figures such as Alan Ball, Peter Fox and Noel Blake.

A new century would eventually see a new dawn for the Grecians, as two new stands went up changing the landscape physically, before the takeover by the trust changed the landscape in the boardroom. Sadly none of this could stop City falling out of the football league for the first time, however this low proceeded a number of significant highs, beginning with Alex Inglethorpes side capitalizing on a third round tie at Old Trafford by earning a draw and the financial lifeline of a televised replay at the park.

In 2006 Paul Tisdale was appointed the Manager and this started an up turn in City’s league status. In his first season the City reached Wembley for the first ever time in the play off final. Despite taking the lead City eventually lost 2-1 against Morecambe, but this did not stop them for long.  In the following season they again reached the play off final at Wembley where Rob’s Edward’s goal secured promotion back to the now League 2 after 5 seasons of non-league football.

Amazingly, the Club then achieved back-to-back promotions for the first time ever to return to the third tier (League 1) after a gap of 15 years. In returning to the third tier, City achieved the distinction of having played more seasons in this tier than any other club who have never reached the top two tiers! However, they nearly made a swift return to the 4th tier when only a win on the final day of the season saw them survive by one point.

One high of the last decade has been the success of the City’s academy, with several younger players making the breakthrough into the first team, most notably Matt Grimes, who along with keeper Christy Pym, received call ups for the England U20 team a credit to the club’s academy and the playing style of the club under Paul Tisdale.

In advance of the start of the new 2014/15 season, the club travelled to Brazil to mark the 100th anniversary of their encounter with the first ever Brazilian national team. They played three games drawing one and winning the other two. The new season began and the potential of Grimes did not go unnoticed and eventually in January 2015 he was sold to Swansea for a fee of around £1.75m… a record fee for the club.

Another landmark was reached when Paul Tisdale managed his 500th game for the club in February 2016, going on to replace the Arthur Chadwick as City’s longest serving manager. On the playing front, Ethan Ampadu replaced the legendary Cliff Bastin by becoming the youngest ever City player, appearing for the Grecians aged just 15 years, 10 months and 26 days old.

Outside of the footballing side, City continue to forge links within the Community with various partnerships to deliver physical activity, health and wellbeing and educational services for people of all ages across Devon. In addition during 2015, it was estimated that volunteers had done £310,000 worth of work, spread over 28,000 hours, in the last year alone. This was an increase of 50% compared to the 2012 figures.