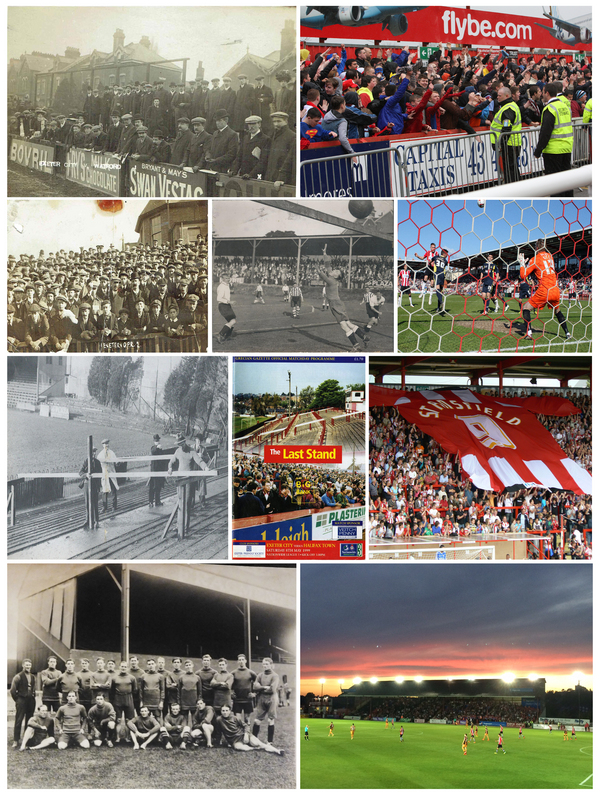 Since its early years as a farmer’s field, and then a multipurpose venue for various sports and performances, the ground has seen the Grecians grow as a club, hosting many generations of fans. Here we take a look at the park itself, and how it has developed to suit the needs of the club, the fans and the footballing authorities.

Known as ‘Bradford’s Field’, after tenant Thomas Bradford, in the years before 1906, the grounds of St James Park was leased to the Exeter under a 21-year contract beginning in 1908 after plans to secure the ground at Barnfield fell through. This put an end to the variety of other activities that the field had previously hosted, and the development of a proper football stadium began.

In February 1908 a local sports outfitter, a Norman Kendall proposed forming a limited company with the public subscribing for £1.00 shares. The result was the formation of Exeter Football and Athletic Company Limited. A 21-year lease was taken out on St James Park with the urgent need to turn it into a stadium suitable for staging professional football. A small wooden grandstand with changing facilities was erected on the Well Street side of the pitch.

An architect drew up plans for the grounds to have a capacity of 15,000 through the creation of extra space with the aid of stands, flower-pot staging, and banking up - these plans drew much attention in Exeter. The original grandstand was constructed later that year, when it had been ascertained that Exeter would participate in the Southern League’s First Division. Opposite this was the ‘Flower-Pot Stand’, named for the geraniums that had been planted there, and this was where the more ardent and boisterous fans traditionally clustered.

In 1910, it was found that the pitch fell a few yards short of the minimum pitch length as stipulated by the Football Association. This led to a succession of teams refusing to play at St James Park, and Exeter being forced to give up home advantage. Exeter City directors attempted to re-mark the pitch at an angle, but even so the pitch was three yards too short. The club’s next step was to begin negotiations to purchase an adjacent plot of land from its owner, but the two parties could not reach an agreement on its price. It was eventually local MP Arthur Duke who came to the aid of the club - he generously purchased the extension that the club could ill afford.

The pitch was thus extended to meet FA Cup regulations, and this new section was later dubbed the Big Bank. West Ham United were the first team hosted on the newly elongated pitch, and held Exeter City to a thrilling 3-3 draw in a game attended by many significant individuals within Exeter.

A shelter for spectators opposite the Grandstand was proposed by the Supporters Club in 1919, and set to accommodate 5,000 people. In 1920 it was announced that Exeter City Football Club would be joining the Football League, and, in preparation for this, the structures at St James Park were given an upgrade. These refurbishes were estimated to cost around £1,000, and were expected to ‘greatly improve the comfort of the spectator’.

It was planned that the popular bank would consist of twenty-four steppings of fifteen inches wide, each with six-inch steps, to give every spectator a good view of the game. The pitch would be enclosed by iron railings, and the enclosure by St James Road would be widened to include a section of the turf. When the sale of Dick Pym to the Bolton Wanderers brought in £5,000 the very next year, the club were finally able to purchase the grounds of St James Park.

All was well until 1926 when the Grandstand was engulfed by a massive fire that could be felt from as far away as High Street. One theory is that a coke stove had overheated while some shirts had been left to dry nearby, causing them to catch a fire that spread quickly and fiercely. The blaze quickly reached the timbers, and the roof caved in. The pitch itself was scorched. The fire consumed all of the club’s documents, furniture, and gear, save a few books and chairs - the damage was estimated to be over £60,000. In the summer of the same year a new grandstand was constructed, and is still standing today.

As we know from Aidan’s article, St James Park housed American troops as part of the war effort during the Second World War. This left the grounds in a shabby condition - the Big Bank was overgrown with weeds, military buildings had been constructed on the terracing, and trucks had left marks on the pitch, which had been used as a parade ground. A major operation was planned to restore and prepare St James’ Park for the upcoming season.

By 1950, a new entrance to the ground at St James Road and an extension of the terracing at that end was constructed; new entrances were in place at Well Street and Old Tiverton Road; and the players’ recreational space was taken out of the covered enclosure to allow for more terracing. These changes were estimated to have increased the capacity of the grounds to 25,000.

Exeter City had been using lights for training purposes from as far back as 1946, and in 1953, they became one of the first senior clubs to use floodlights in matches, and the first club in Devon. The first floodlit match was in fact due to take place two years earlier, in March 1951, but was postponed because of a thick fog to 9th March, 1953, in a game against Plymouth Argyle. The first set of floodlights lasted just over a decade before they were deemed to be of unsatisfactory quality by the Football League. In 1964 the club had to install new floodlights after the Football League banned all floodlit games following complaints from visiting teams about the poor quality of the floodlight at St James Park. The cost £8,000, and the new lights were officially switched on with a friendly against Arsenal.

The face of the park changed very little between the 1950s and 1980s until the 1985 Bradford City stadium fire and the 1989 Hillsborough disaster heralded a review of stadium planning in the UK. In their aftermath, new safety regulations were implemented that Exeter City had to comply with, to attain a ‘Ground Safety Certificate’. The Grandstand in particular required extensive modifications - exits and seating had to be altered, and the stand itself, which was made almost entirely of wood, had to be fireproofed. The Gates and crash barriers in the Big Bank needed improvements, as did the terracing, barriers, and roofing in the Cowshed.

These changes were no doubt expensive, and with finances tight and the season set to begin in days, the club directors and Exeter City Council agreed that the capacity would be lowered until repair works could be carried out. The Cowshed was closed, and the Big Bank and Grandstand had their capacity lowered, the latter by closing several rows of seats and then removing even more seats to widen the aisles. Initial works on the Cowshed cost between £150,000 and £200,000. But regulations became more stringent, requiring repair after repair, and developments were still going on in 1991. Steps, fences, and exits were repaired or installed, and facilities catering for the police and the St John Ambulance Brigade were created beside the Big Bank.

The club’s financial turmoil came to a head in 1994, and St James Park changed hands - the land was sold to Beazer Homes, and then to the Exeter City Council. The latter thankfully leased it back to the football club. But by 1996 finances had improved, and the club now had the means to upgrade their grounds. Earlier plans to move to a new stadium at Matford Marshes had fallen through, and so the club decided to improve and modernise their existing facilities.

This was a period when seating was preferred to terracing, and most stadiums already had executive boxes. The times were changing, and the grounds too were about to undergo perhaps its biggest transformation since 1926. From 1999-2000 the Big Bank stand, or Cliff Bastin stand, was demolished and rebuilt to be covered, and in 2001 the Cowshed stand was rebuilt as a covered and fully seated stand. The neighbouring building, which was formerly St James School, was refurbished to hold new offices, a social club, and hospitality and conference facilities.

As part of the developments in this period, fans were invited to sponsor a brick in the new main stand, and hundreds of names from the Exeter City Football Club community were imprinted on facade of the new building. Financial troubles, including debt to the stadium developers, caused plans to be halted in 2002, but a 2005 FA Cup match at Old Trafford improved the situation enough for repair work to continue.

Perhaps due to the gradual, and sometimes disrupted, process of development, St James Park at present is a distinct merger of old and new elements. One side of the pitch is the Old Grandstand, which originally opened in 1927 and is the oldest structure on the grounds. This seats up to 1401 and houses the changing rooms, 100 club, and media. Opposite it is the far newer WTS stand, home to eight executive boxes and the club’s boardroom. Thatchers ‘Big Bank’, a covered terrace that replaced an open one in 2000, has a capacity of just under 4,000 and is the largest terrace left in the Football League. Away supporters occupy St James Road terrace, on the other end, which, as seen in our cover panel, is as familiar today as it may have been in 1920.

The ground may be set to undergo yet another big change. The St James Park Development was launched in June 23rd, 2015, and its plans include rebuilding the Old Grandstand to increase its capacity by over 1,000, upgrading both player and referee changing facilities, improvements to the St James Road and Well Street areas, upgrades of various other parts of the ground, and the setup of a convenience store on the Yeo and Davey site.