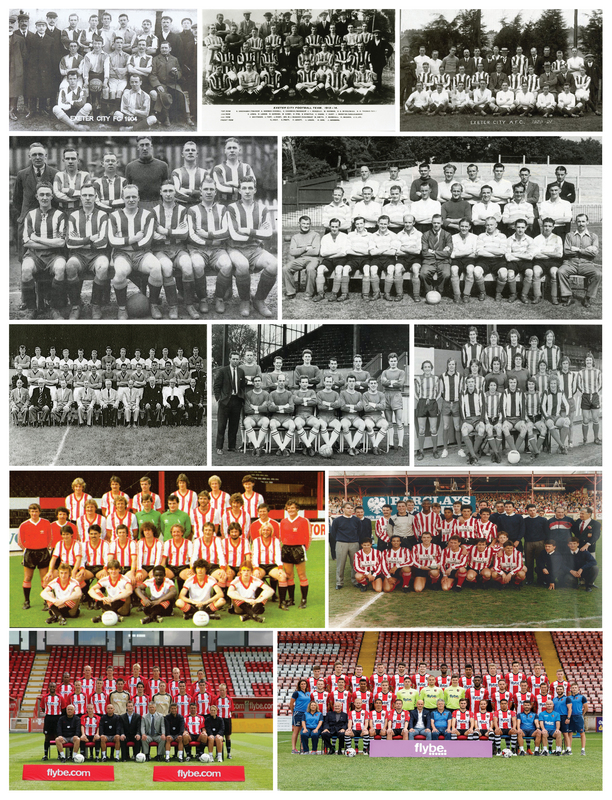 Over the course of the History of St James Park project, almost every squad photograph dating back to the days of St Sidwell’s United has been discovered and collected for the archive. Here are a selection of some of City’s most notable squads, players, and kit changes.

The first squad picture of Exeter City Football Club, taken after the name was changed from St Sidwell’s United. While the image is in black and white, we know that the team is wearing the original green and white colours of our founders. In the photo (back row and sixth from the left) is Sid Thomas, who was instrumental in the formation of the club whilst also being the star striker… His 41 goals in a single season is still the club record.

Taken from the corner of the pitch in front of the gap between what would become the Old Grandstand and the Big Bank, this squad photo features many of the players who would go on to thrash Portsmouth on the FA Cup and ultimately take the historic trip to South America. It also quite poignantly captures many of those who would be posing in military uniforms in the coming years.

Exeter City’s first ever Football League Squad poses for the pre-season photograph wearing what was by now the familiar red and white stripes of the club… Well the first XI are at least. Featured in the photo in the back row (4th from the right) is Dick Pym, who would soon be sold to Bolton for around £5,000. The club used this money, along with funds raised from selling John Mitton & Billy Wright, to buy SJP outright.

I doubt anyone in this picture, not even manager Billy McDevitt, would have imagined that just a few months later this side would have been in the draw for the FA Cup semi-final. While more is known about that incredible cup run, it is less known that McDevitt went on to be one of the clubs most successful managers, finishing runner up in the league in 1933, and then a year later winning the Division Three (south) KO Cup.

After the war came the biggest change in the team appearance with the introduction of hoops in place of stripes. Open neck/lace up collars where also replaced with a more ‘modern’ look. These hoops weren’t around for long though, and by 1950 City were turning out in plain red shirts with white collars. It would not be until 1968 that the familiar stripes would return.

By the late 1950s the team were rocking the fashionable v-neck design as they attempted to find the clubs first promotion. Two of the clubs greatest players can be seen in this particular squad photo, in Arnold Mitchell and Keith Harvey, who between them they went on to make 978 league appearances for the Grecians.

Decked out in red shirts with a white round neck trim, Jack Edwards side looked not too dissimilar to Bill Shankly’s Liverpool, and with a former player from the Anfield based team leading the way upfront, this is the side went on to become the first team in the clubs history to achieve promotion.

Back in a more familiar City kit, this is the team who would win promotion for the second time in our history.  Initially managed by John Newman and then by Bobby Saxton (front and centre), the team who were captained by John Hore would be the first to exceed 60 points (two for a win), and set a then club record of seven wins in a row to finish the season in style. As runners-up

If an Adidas kit was good enough for the current World Cup holders Argentina, then it cant have been too bad for ECFC. Between 1977 and 1982 the Grecians were kitted out in the iconic German sports design, and while success in the league was not to be, it was certainly alright in the cup as this side reached the quarter finals of the FA Cup for the first time in 50 years.

City fan will most likely remember the kit maker Ribero, and the sponsor T.A.J Hibberd, almost as fondly as the manager Terry Cooper. This particular photo was taken after the final home game of the season, and features the original Division Four trophy given to the side who got promoted as champions without losing a single game at home in the league or cup.

With Alex Inglethorpe in charge this is the first squad photo taken of a non-league City team in 85 years. However, this is the side that would progress to play Manchester United in the FA Cup, while some of these players would return us to the league by winning back-to-back promotions for the first and only time so far, under the guidance of our current manager Paul Tisdale.

The most recent City Squad, photographed in the summer of 2016. While the season has not yet finished, this team has recently equaled historic records by winning 7 in a row for the first time in 40 years. The photo also contains David Wheeler, who set a new club record of scoring in seven successive matches, showing that the History of ECFC and St James Park is never settled.