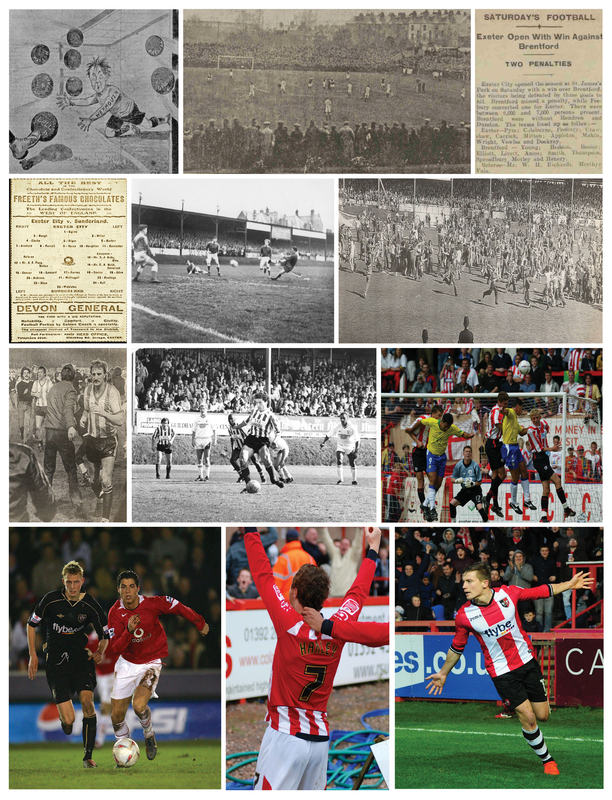 With more than 3,000 matches having taken place on the St James Park turf, this article picks out some of the very best results, or most significant games, in the club’s history.

It’s not often that you see double figures in a match, and for the Grecians it has only happened the once in a first-class fixture. City went into the FA Cup first round qualifying tie against their South West opponents, Weymouth, as the strong favourites. This was largely due the club’s recently attained professional status, as well as the reputation of their main forward, James ‘Daisy’ Bell. As the match kicked off in front of fans in the newly erected wooden grandstand, it was clear that the ‘homesters’ were well deserving of their favourites tag, while Bell also lived up to his reputation as he joined the scoring frenzy that saw City 10-0 up at half time! In all ‘Daisy’ would bag himself 6 goals in total in a match that is still the clubs record win today.

Aston Villa, the reigning cup holders, came to SJP in February 1914 for what was lauded as the biggest match in City’s history. Reports of the match reveal that ‘tramcars and every conceivable form of transport converged on the ground’ and that the gates had to close early to avoid problems. The official attendance for the game was given as 10,000, which surprised the supporters who thought that there were at least 13,000 packed in the ground. In previous rounds, Villa had got past Sunderland and Everton with relative ease, but they found the Grecians to be much more difficult to knock out, and a brace from Harry Hampton was enough for the holders to edge through. Despite our exit, the exhaustive performance from the players, along with the 4-0 thumping of Portsmouth in the previous round, was enough to catch the eye of the FA and help earn us a little trip to South America in the summer.

Not far off 100 seasons ago, Exeter City stepped out onto the pitch to play their first ever Football League match against Brentford. Having won their previous practice game 6-0, confidence was high in the City, and a reported 8,000 fans came through the turnstiles to see Arthur Chadwick’s side have ‘the better of the match’ on the way to victory. As a result William Wright became the first league scorer in the club’s history, while keeper Dick Pym continued to attract attention… Must have seemed easy this league business!

Having secured the draw in the original tie, City welcomed Sunderland to St James Park for the FA Cup quarter-final knowing that a win would earn the club a semi-final match against Birmingham at Elland Road. This is the only time the club have ever been pulled out of the hat for this stage of the FAmous Cup, and the City were determined to make the most of it. Popularity for the game was such that we’re told of schools inspectors searching the streets for children bunking off school, but despite their best efforts to round up potential fans 20,984 packed the park to create a club record that stands today. The crowd made an incredible noise with shouts, cheers and the ringing of bells, while the song ‘there’s a good time coming’ could be heard above it all. In the end a visit to Leeds was not to be as goals from Percy Varco and George Purcell were not enough to cancel out four well-taken goals from the visitors, whose captain, the Scottish international Jock McDougall, described the City team as ‘wonderful cup fighters’

For the final home match of the season City did not yet know what would be needed in the final weeks to gain promotion, so it appears they made sure that events at St James Park ended in the best possible fashion by soundly thrashing the Spirites in front of 9,000 supporters. With the Cowshed creating a tremendous atmosphere from start to finish, the team produced some quality football under the SJP floodlights to silence those who, following a poor display at Bradford in the previous game, had been skeptical of their chances. Alan Banks was the star of the show; running the attack and setting up two goals to go with the two he had scored himself. At the end hundreds of young fans raced onto the pitch to surround Banks and his victorious team mates to congratulate them on the biggest win of a season, while just one week later many of these fans would be amongst the crowds outside St David’s Station to congratulate the players again, this time for achieving the first promotion in the club’s history.

Having dropped just four points in the precious 13 matches, City went into the final match of the season knowing that promotion was secure, and that they had broken the 60 point barrier for the first time in the clubs history. On the kind of sunny afternoon synonymous with the end of the football season, fans crammed into all four sides of SJP to see their heroes in action. Booby Hodge grabbed the opening goal in the first half, leading to fans spilling from the primrose bank onto the pitch to celebrate. Twice again the mini pitch invasion would happen thanks to goals from Alan Beer and Nicky Jennings, before the whole ground would join in on the final whistle, leaving the ref to grab the ball and lead the sprint into the Old Grandstand changing rooms.

For many of the matches so far it has required news reports or first hand accounts to know what happened, but for this match the TV cameras where in town, which is good because this is possibly the finest performance of any City side ever! As with Sunderland all those years ago, City had earned a draw in the FA Cup against a North East side expected to beat them. However unlike 1931, Peter Hatch and co. were nowhere close to being beaten in a display described as champagne football. While watching the highlights shows why this is not an exaggeration, it can be nothing compared to being in the ground back then as Hatchy scored from a corner more than three decades before Lee Holmes beat Liverpool’s Adam Bogdan from the same spot. Back in 1981 though this was just one of the goals, as Hatch grabbed one more to go with efforts from Martyn and Lee Rogers and send ECFC into the quarter finals for the first time in 50 years.

Having become the first team in the whole of the football league to achieve automatic promotion, City welcomed Scarborough to SJP, in a bid to complete the job and win the title. City took the lead twice through Tom Kelly’s penalty and close range effort from Richard Young, yet the visitors pegged them back each time. Then on the hour the opportunity arrived. Referee, Gerald Ashby blew up for a handball by Mick Clarke in the box, and Tom Kelly stood up to take his second spot kick of the game. Given the nature of the game, Kelly may have been unaware that he was about to make history, but with calm concentration the left back stepped up, sent the keeper the wrong way, and secured a league title for Exeter for the first and only time so far.

On a sunny day in May the Brazilian Masters came to town to celebrate 100 years of being Exeter City Football Club. The occasion also marked the 90th anniversary of Exeter’s trip to Brazil, where the Seleção lined up against the Grecians in what is recognised as the first match in the country’s long and successful football history. On a vibrant day at the park, 6000 people were treated to an afternoon of Samba style both on and off the pitch, which ranged from dancing displays by a large troupe of Brazilian dancers to a scissor kick from Captain Glenn Cronin which narrowly missed the target. Glenn, who swapped shirts with Dunga after the game, later stated that ‘They Just kept the ball for fun, showed us how to play. Dunga walked through the whole game. Unbelievable’ For City, the whole occasion marked the end of a difficult period in which they had been relegated from the football league. It was a celebration of the Grecians’ proud history and an event where in the words of Dunga himself…’’Football’s the winner’.

This match was less about the result, and more about what it represented. Following an exciting and emotional draw at Old Trafford, Sir Alex Ferguson and his multi-medal winning squad arrived at the Park along with the news crews and TV Cameras. The shock of the previous round had meant that this was box office, and the resulting windfall that the attraction would generate represented a lifeline to the club and the supporter’s trust. For many this is seen, at least symbolically, as the game that forged the modern ECFC, and the achievements of this side will not be forgotten in a long time. On the night Sir Alex made no mistakes by including the likes of Scholes, Rooney, Ronaldo and Giggs in the line up. Ronaldo opened the scoring, but he didn’t have it all his own way as Scott Hiley ensured his legendary status at the club by nutmegging the player who would go on to win the Ballon d’Or 5 times in the next decade. City themselves had chances to score through Sean Devine and Andrew Taylor, and the former even had a goal disallowed for offside before Rooney rounded off the scoring with 3 minutes to go.

Having not won in the previous 6 matches, City went into the final day of the season needing a result to secure their league one status. The match did not start well, when with just six minutes gone a mix up between Richard Duffy and Matt Taylor let Gary Roberts in to fire home from just outside the area. However, buoyed by the 8,000 plus crowd, City came back into the game as Taylor made amends for the setback by hammering a header into the net from a Ryan Harley corner. With Danny Drinkwater buzzing around in midfield for the visitors the game was in the balance and with the clock passing the 80 minute mark City were looking nervously at the trap-door to League 2. Then, just minutes later, SJP erupted as Ryan Harley fired home from the edge of the box to secure third tier football for the third season in a row.

Until the last minute before publishing, this was going to be the fantastic 2-2 draw against Jurgen Klopp's Liverpool, but recent historic events mean that this match comes on as a late sub. In the previous match against Wycombe, David Wheeler had scored for the sixth game in a row, equaling a record first set by Henry Poulter in 1934 and only matched by Rod Williams and Alan Beer since. However in this match the record became Wheeler’s own, as he became the first Grecian to score in seven successive matches. Not only that but this was City’s seventh league win on the bounce for the first time in forty years, and the first time ever in a single season.